Perfect in any season
The skiing and hiking area of Merano 2000 above Merano and Avelengo is the most popular recreational area for locals and its guests from the region. The entire area of Merano 2000 offers you a great combination of hiking trails, mountain peaks, ski slopes, toboggan runs and exquisitely served huts.
In summer 2010, the 40-year-old cable car was demolished and replaced by a modern cable car. The new gondolas with a capacity of 120 people reach the mountain station at Piffing in just 7 minutes, which acts as the vibrant center of the ski and hiking area. From here all hiking, climbing and biking tours start in summer, in winter after leaving the cable car cabin you are practically already in the middle of the slopes, at the beginning of the steep slope with a view of the spa town of Merano. 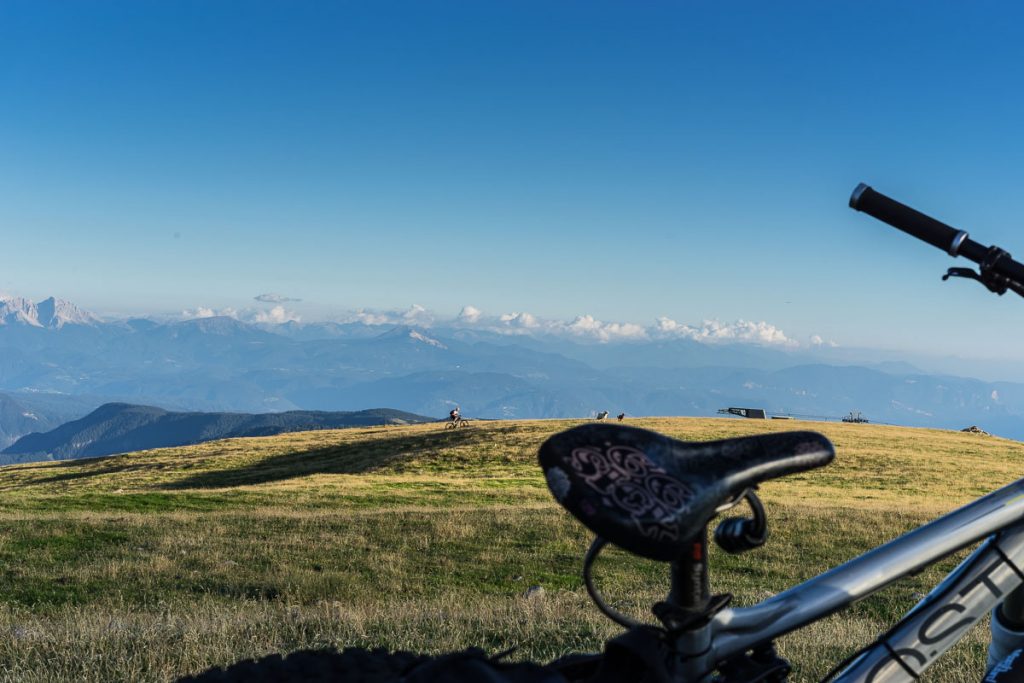 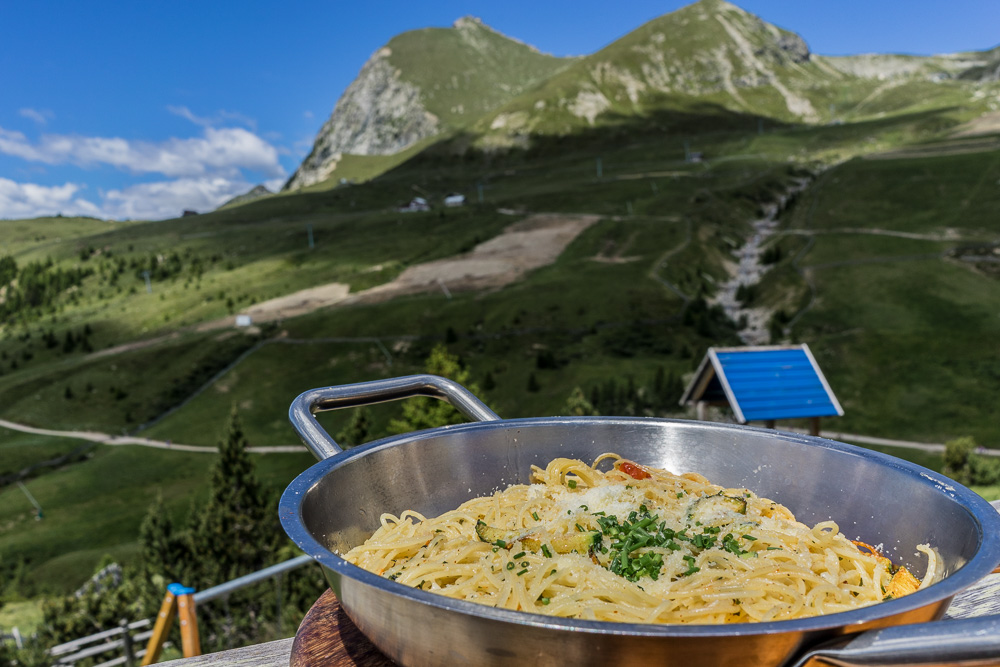 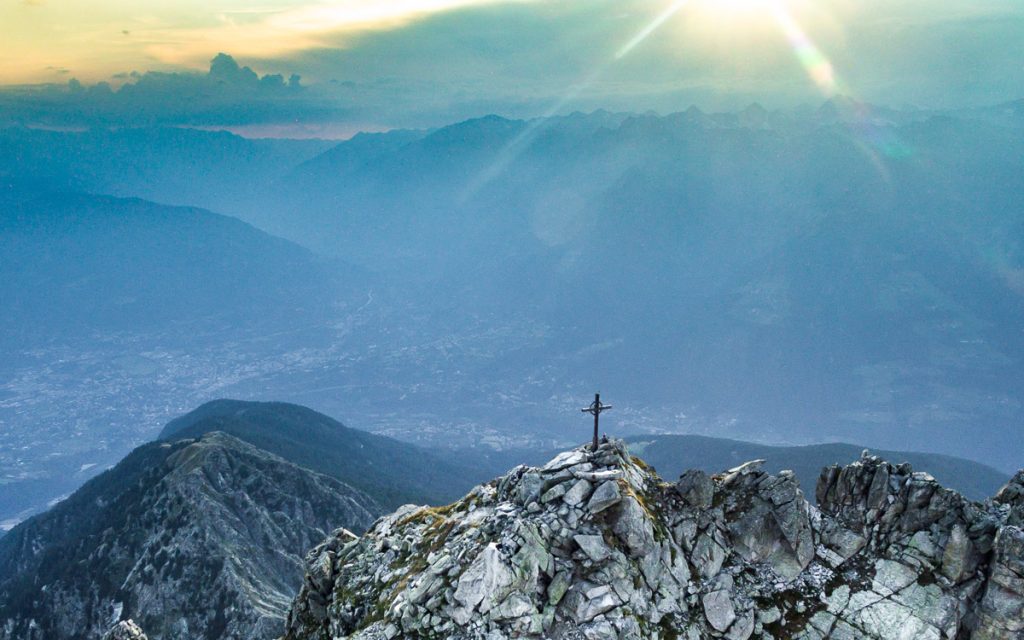 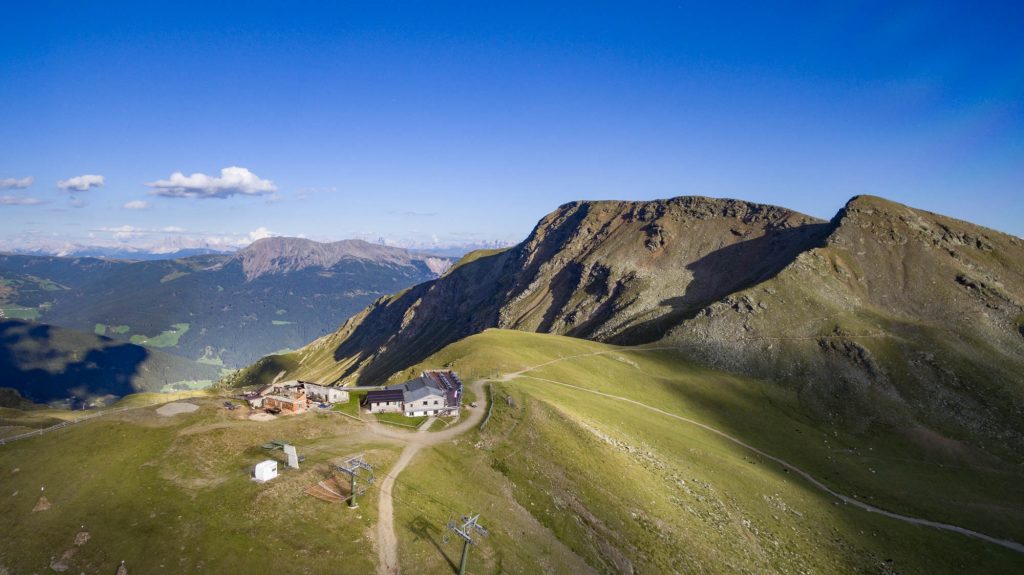 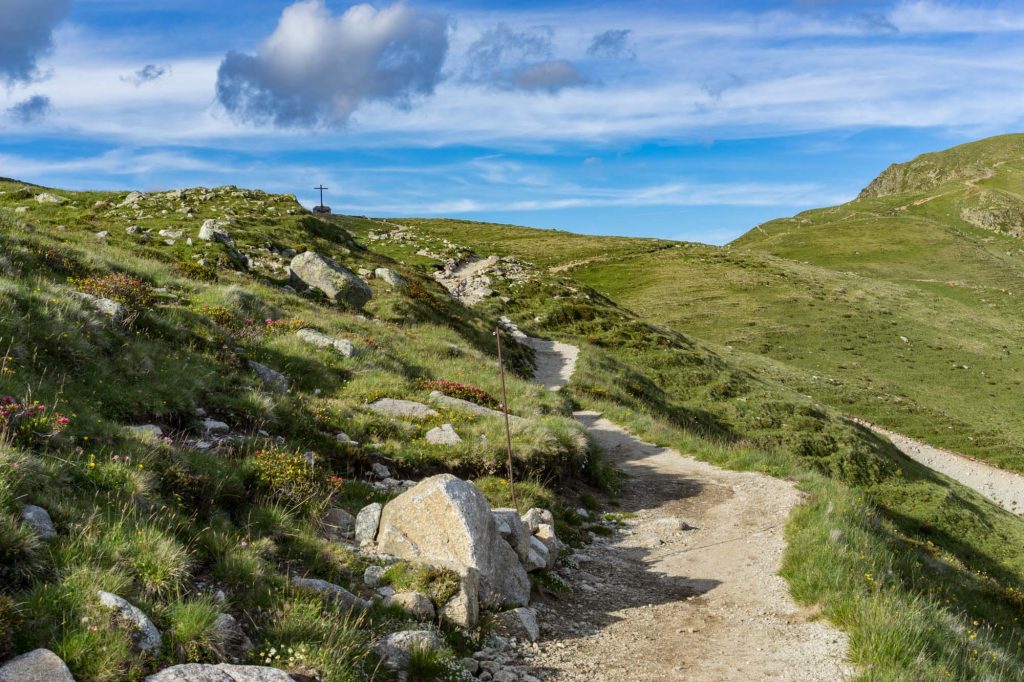 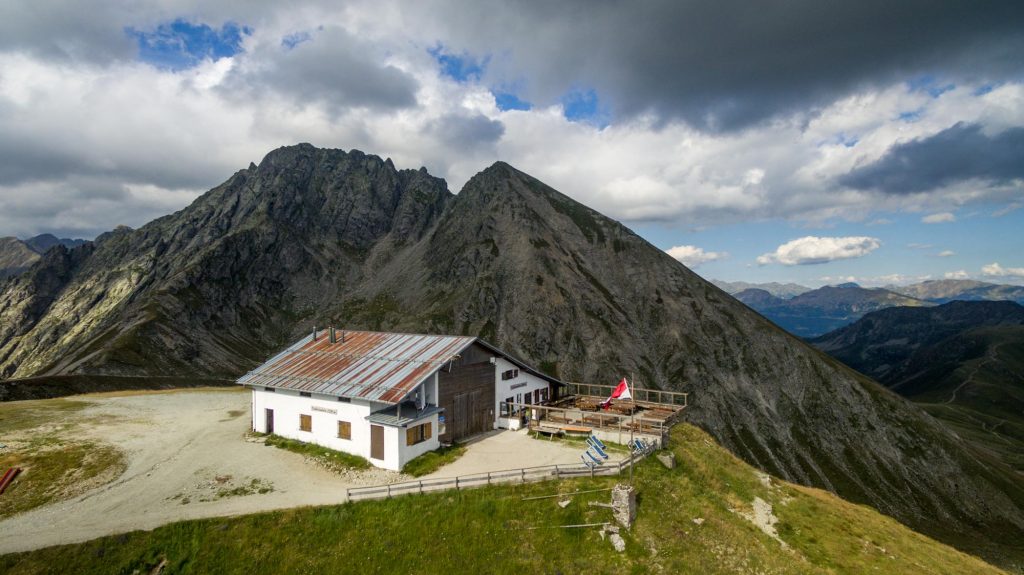 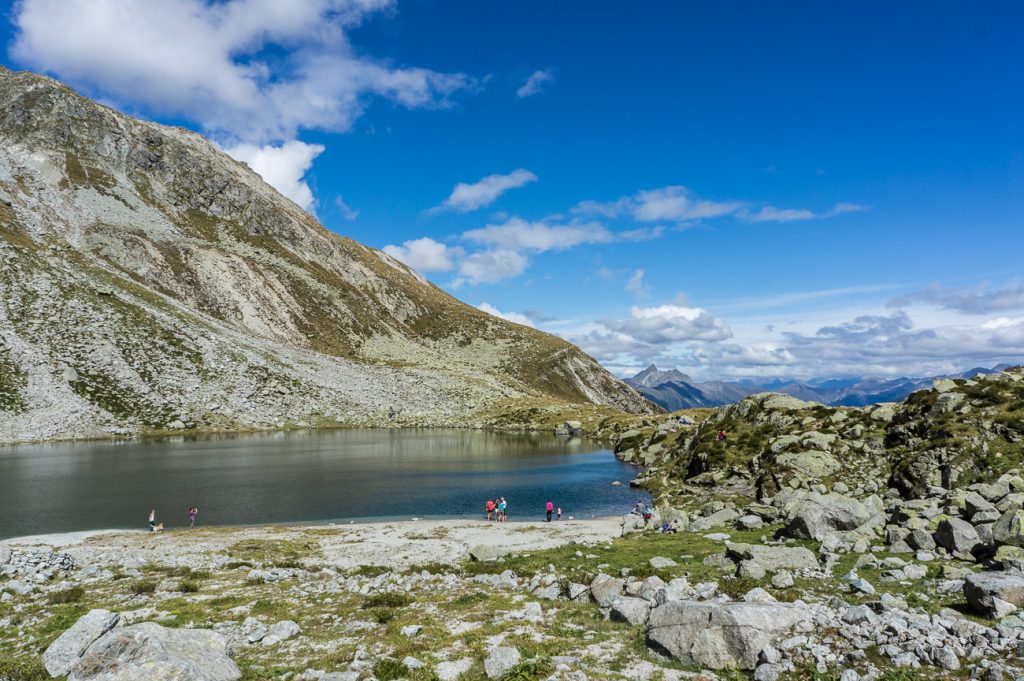 In short, Merano 2000 is easy and quick to reach and offers a lovely, but also highly variable landscape, which varies from sparse larch forests to barren mountain ridges and rugged peaks, making it an ideal destination for sports enthusiasts and those seeking relaxation.

Look forward to a breathtaking view of the Ulten mountains, the Texel and Ortler groups, from some points you can easily see the Marmolata and the Sella massif in the Dolomites in good weather!
The hiking area Merano 2000 is ideal for easy to medium tours. You can reach the Piffingköpfl on foot, by cable car or by cable car from Falzeben.  Those who are really comfortable can sit down on the terrace for a snack, in order to start the "descent" to Falzeben, where the Rotwand and Zuegg huts invite you to stop for a bite to eat. Ideally, however, you hike along the forest road "to the rear" in a southwesterly direction, where such rewarding hiking destinations as the Ifinger peak (only for experienced hikers!), as well as the Kuhleiten Hut and the Mittager Hut await you. In the middle, a scenic experience: The player, a small hump near the Meranerhütte (about 30 minutes walk away), which offers a magnificent view of the Ifinger, the Texelgruppe, the Salten and the Sarntal Alps.

Show Location
The Merano Hut of the South Tyrolean Alpine Club is located on the European Long Distance Trail E5 and offers very good cuisine in generous portions and fresh cakes, served on its large terrace. Perfect starting point for a side trip to the player. Can be reached from the top station of the cable car in about 1h on an easy hiking route.
2

Show Location
The Kuhleitenhütte is exposed directly on the steep ridge to the Ifinger summit at 2361 meters. You have to climb 500 meters from the top station of the cable car to enjoy the view from this unique hut. The hut is also a good place to rest after an ascent of the Ifinger. In winter, ski tourers from the entire region meet here.
3

Show Location
The Kesselberg Hut, the most remote hut of Merano 2000, is located at the transition to the Sarntal Valley, which you have a wonderful view of from here. The last ascent on the Miesensteinerjoch runs over a wide ridge and is of beguiling beauty. The hut offers simple meals in a small self-service restaurant, which you can take on the very large terrace.
4

Show Location
At Lake Kratzberg, beach feeling comes up immediately when you see the white beach on the shore of the lake. Also the clarity of its water can easily compete with the most beautiful beaches in Sardinia. Around the lake there is plenty of space for your picnic and for resting.
5

Show Location
The Ifinger, Merano's local mountain offers two peaks with different difficulties: The small Ifinger peak is just a little lower than its big brother, but is easy to climb for any hiker. Some alpine experience is required to climb the big Ifinger peak , because the last ascent to the summit is very steep and exposed.
The only destination in Merano 2000, which you can also reach in summer with the chairlift, since summer 2016 there is (finally) the possibility to take mountain bikes up here. Once on the wide plateau, you can continue to the summit of the Mittager or march a narrow hiking trail to the Kesselberg Hut not without first enjoying the panorama to the south!

Inexpensive skifun: You can benefit from the reduced 2h or 3h card. The descent with the cable car is possible even after the expiration of the card. Somehow, skiing at Merano 2000 makes you feel right at home. Clearly arranged 6 lifts, a cable car, a ski kindergarten and of course the alpine bob. All of this surrounded by the rugged Ifinger peak and the gentle ridge of the Salten and garnished by ski huts which consistently pay attention to quality and friendliness. Who wants to relax beside the ski pleasure and wants to win distance from the hectic of the everyday life, as well as the industrial everyday life of many other skiing areas on a sun-spoiled hut terrace, is here in the best way!

Around the turn of the millennium, the building contractor Serafin Unterholzner recognized the enormous potential of this versatile area and began with heavy investments. Step by step, the lifts and huts in the back area were renovated and partially rebuilt, a water basin for the traditionally water-poor area was added below the Kesselberg Hut, which was again expanded threefold in the summer of 2011 in order to be able to guarantee even more snow. even more snow.

The ski resort includes 40 kilometers of slopes, which are accessed by the cable car and 6 ski lifts. Traditionally (depending on snow conditions) this always opens on December 8. The ski area is divided into a "front" and a "back" part. The former, with the exception of the steep slope, offers rather easy slopes and can also be reached by the cable car to Falzeben. This is joined by the chairlift "Wallpach", newly built in 2018 which is much used by ski schools and beginners. The "back" part is accessed by a feeder chairlift, the lifts and slopes there make every skier's heart beat faster:

The Oswald slope attracts with 2 downhill variants, both are not very steep, but very wide and therefore brilliant for wide, fast carving turns.
The Kesselberg slope also has 2 downhill runs, from the Kesselberg hut you have a view over the Sarntal and its Alps.
The Mittager slope provides a perfect panoramic view at the top, after the descent over the notorious steep slope you reach an undulating, varied and wide carving slope.
There are 8 ski huts spread over the ski area which are very well visited especially at lunchtime, also due to the numerous snow hikers in the area.

Freeriding
Freeride possibilities can be found next to all slopes in the "back" part of the ski area if the snow situation allows it. The most beautiful (and also most dangerous) variant is to the left of the Kesselberg lift.

Ski touring
Ski tourers are generally tolerated on Merano 2000 only on the pedestrian paths. With the exception of Thursday and Friday: on these two days the piste vehicles are at rest from 17:00- until 23:00 and you can go from Falzeben up to the Kuhleitenhütte and also ski down again on the pistes! The ascent is 750 hm and takes about 2h, which is mainly due to the flat, long ski trail. At the hut, warm meals and cool yeast beer await the hungry and thirsty athlete.

Tobogganing
The toboggan run on Merano 2000 leads from the mountain station on Piffing down to Falzeben. On this route, which even inexperienced tobogganists can manage, 300 meters of altitude are "destroyed".  You can choose the ascent on foot or use the Falzeben cable car for this purpose.

<  Hiking in Merano
Hotel Merano
Wellness Retreats
Hotel openings and offers 2023
Hotels with infinity pool
More
Orenknott
Merano - Santa Caterina
Snowshoeing in Val d'Ultimo
We use cookies and other technologies on our website in order to offer you the full range of functions of our offer. For example, we use cookies for analysis purposes, personalised content and advertising. By continuing to use our website, you agree to the use of cookies.
OK Read more